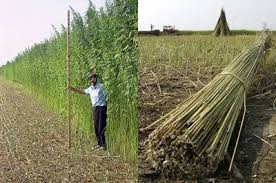 Cynthiana farmer Brian Furnish has a successful tobacco and cattle operation but wants to make life better for his family and many other Kentucky farmers who once depended on tobacco for their living.

“I’ve seen what’s happened with the decline of tobacco,” said Furnish. “Central and eastern Kentucky need a new crop. If we can build an industry around hemp here, it’ll be beneficial to growers.”

Furnish is also the chair of the Kentucky Hemp Industry Council, a 16-member group from around the state and nation that represents various stakeholder in hemp’s future, from farmers and crop processors to industries and retailers that want to process and sell hemp products. Hemp’s fiber and oil can be used in a multitude of goods, including food, paper, building materials, beauty products and much more.

Kentucky is entering its second year of industrial hemp pilot projects. The first round in 2014 produced a wealth of data about production methods, seed varieties, harvesting, processing techniques and uses for harvested hemp.

“We’re looking to conduct a wide scope of pilot projects in 2015,” said Agriculture Commissioner James Comer, a strong advocate for hemp and a Republican candidate for governor.

“There are more agriculture processors in Kentucky today making an investment in the state, signing contracts and hiring people. This is something we’ll be able to look back at and say ‘This was a good decision,’” said Comer.

Comer says one company that showed an early interest in developing the state’s hemp industry is Dr. Bonner’s Magic Soaps, a company selling hemp formulated soaps, organic bars, lip balm and body care products, according to its website. The company donated $50,000 to aid the hemp council’s work in promoting a future for hemp in Kentucky.

Comer says hundreds of others have applied for permits to participate in this year’s hemp pilot program. “There’s no shortage of farmers who want to grow hemp,” he said.

“We would like to resume our leading role as the industrial hemp capital of the globe,” he said.

Miller and others have lobbied Congress and President Barack Obama’s administration to try to regain full legalization of hemp, which was banned 75 years ago, along with its intoxicating plant cousin, marijuana.

In the last year, no hemp has been commercialized in Kentucky. It remains in the experimental stage.