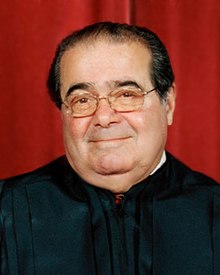 Scalia was a native of Trenton, New Jersey, and attended public grade school and Xavier High School in New York City, then Georgetown University. He obtained his law degree from Harvard Law School and spent six years in a Cleveland law firm, before he became a law school professor at the University of Virginia. In the early 1970s, he served in the Nixon and Ford administrations, eventually as an Assistant Attorney General. He spent most of the Carter years teaching at the University of Chicago, where he became one of the first faculty advisers of the fledgling Federalist Society. In 1982, Ronald Reagan appointed him as judge of the United States Court of Appeals for the District of Columbia Circuit.[6] In 1986, Reagan appointed him to the Supreme Court. Scalia was asked few difficult questions by the Senate Judiciary Committee, and was unanimously confirmed by the Senate, becoming the first Italian-American justice.[7]

Scalia served on the Court for nearly thirty years, during which he established a solidly conservative voting record and ideology, advocating textualism in statutory interpretation and originalism in constitutional interpretation. He was a strong defender of the powers of the executive branch, believing presidential power should be paramount in many areas. He opposed affirmative action and other policies that treated minorities as special groups. He filed separate opinions in many cases and often castigated the Court’s majority in his minority opinions using scathing language.

The future of the Supreme Court now hangs in the balance.

Justice Antonin Scalia, a colorful and by far the most influential member of the Supreme Court’s conservative wing, died on Saturday at a ranch in West Texas. He was 79.

The cause of death was not immediately known. A staunch Catholic, Scalia received last rites from a local priest, according to The New York Times.

Chief Justice John Roberts said in a statement that Scalia’s death is a "great loss to the Court and the country he so loyally served."

"On behalf of the Court and retired Justices, I am saddened to report that our colleague Justice Antonin Scalia has passed away. He was an extraordinary individual and jurist, admired and treasured by colleagues," he said.

Speaking from the White House, President Barack Obama remembered Scalia as "larger than life" and "one of the most consequential judges and thinkers to serve on the Supreme Court."

Obama also said he plans to fill his now-vacant seat.

"I plan to fulfill my constitutional responsibility to nominate a successor in due time," he said, adding that he expects the Senate to confirm him in due course. He also expressed condolences to Scalia’s wife, Maureen, and surviving family.

The death of Supreme Court Justice Antonin Scalia casts a cloud of uncertainty over a Supreme Court term filled with some of the most controversial issues facing the nation: abortion, affirmative action, the rights of religious objectors to the contraceptive mandate in the Affordable Care Act, and the president’s powers on immigration and deportation.

An eight-member court could split on all of those issues. If the court ties in deciding a case, the decision of the appeals court remains in place, without setting a nationwide precedent.

Pending a new justice, the court now has three consistent conservatives — Chief Justice John G. Roberts Jr. and Justices Clarence Thomas and Samuel A. Alito Jr. — and Anthony M. Kennedy, like Scalia a Reagan appointee but one who often sides with the court’s liberals on social issues, such as same-sex marriage.

Here are the key cases to know: